Playtesting: Ironing Out the Bugs

Hey! So welcome to my first playtesting dev log! I will most likely do several of these talking about how playtesting is going, what we accomplished and the lessons learned. Over the last week I had the chance to playtest with 3 people in my bubble, Chris, John, and Matt. This will also be the first time I talk about the mechanics of the game to a wider audience.

First was a trip to Chris’s place. Chris has a great house about 45 minutes outside the city. It seems like every time I plan to go to his place it snows. I dragged a few totes worth of terrain and my 3×3 grass board over to his place, slipping all over the back roads, and we ended up playing 3 really fun games.

Our first game we set up as a nice little city scene. This was Chris’s first time playing so we played the quick start rules, a simplified set of rules meant to get players on their feet with the basic concepts of the game. They teach the basics of combat while simplifying other aspects of the game to make sure players have a solid grasp before feathering in game mechanics like magic, difficult terrain, hiding and sneaking, morale, and the powers the player can use to influence the battle while acting as the bard telling their story. These quick start games are usually played as a 5 on 5, with two archers equipped with short bows and three soldiers equipped with one handed weapons, shields, and light armor. I picked out a force of orcs and Chris picked out a force of humans. Because these were the quick start rules though, these choices were purely cosmetic.

Because this was Chris’s first time playing our first game took about an hour. This included setup, reading through the quick start rules with him and actually playing. In our first battle we had a pretty good fight. It was pretty much one for one losses until I eventually got a lucky dice roll and took out his last soldier. In this match we saw how important ranged troops are. They are extremely powerful when used in combination with melee troops to keep them safe.

Our second game was MUCH quicker. Chris caught on extremely quickly. We rotated the board 90 degrees, rolled off for deployment zones and had a fun little game. In this fight I went second. Chris moved his troops up the field, bringing his archers into the center of the board and setting them up behind some cover. The unfortunate part is that he left them completely unprotected. Anthems of War uses an order pool system and your characters come in two types. Regular characters contribute to the order pool, and any of the orders in that pool can be used to activate and move any regular characters you have, even allowing you to activate characters more than once in a single turn. Instinct characters make up the other type of characters. They represent wild, untrained, unwilling or stubborn characters that do not or will not follow a commander’s orders. The order they generate can only be used on them and in most cases regular orders can not be used on them. The reason I mention this is because in our previous game we almost always activated each character once in the turn. This time, because his two archers were exposed I decided to take advantage. I spent an order moving one of my soldiers up the field in a way to not provoke reactions from the archers. Characters can react to enemies moving within their line of sight, meaning that archers are still a threat, even when it is not the owner’s turn. Using a second order I moved my soldier into contact with the archer and cut him down with little issue. Unfortunately for Chris, his last archer was within another standard move, so I spent a third order and managed to avoid an arrow as my soldier was closing the gap and cut him down as well. This unfortunately left that soldier wide open for counter attacks in the next turn so I spent my remaining 2 orders moving my archers up to hopefully discourage an attack against that lone soldier. Chris called my bluff and moved all three of his remaining characters up to engage. After a bunch of missed arrow shots he ended up taking out MY archers the following turn. This game ended with Chris winning, which was a great comeback from what could have easily been a quick and decisive defeat. 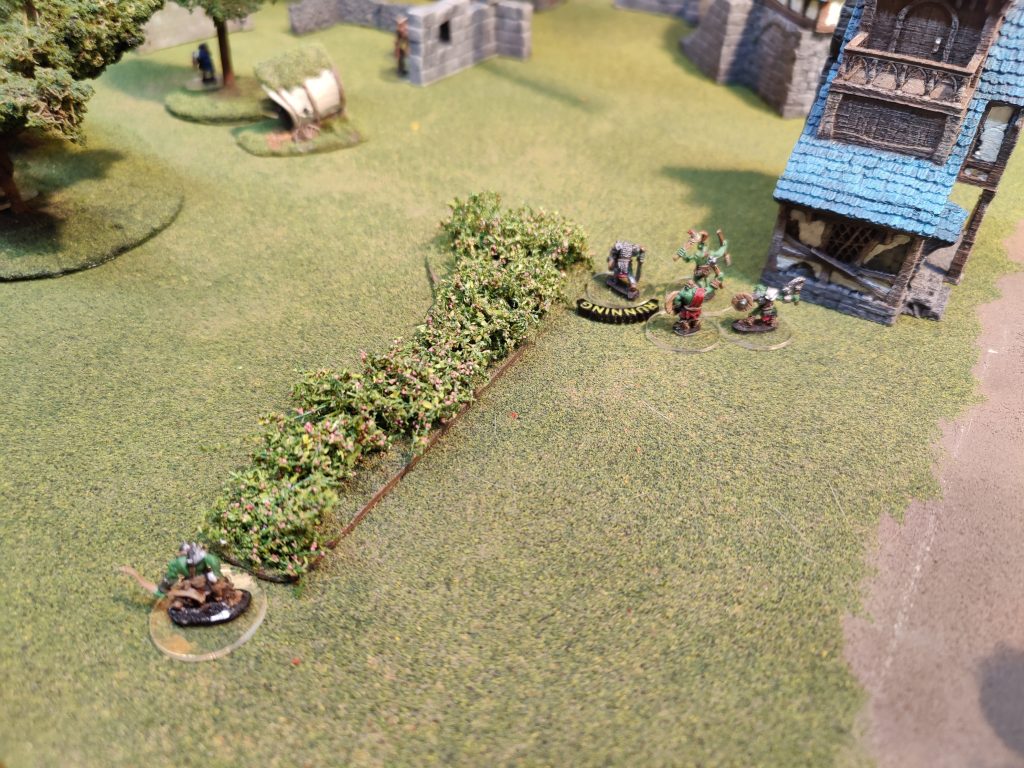 Game 3 we decided to change things up just slightly. We added an extra soldier with no armor, and two hand weapons to each side. We did not want to complicate it as much, so I made the weapon just slightly faster than the swords our soldiers had but also slightly weaker. This added a great dynamic to the game. Not only did we each have an extra order to spend, but we rotated the board another 90 degrees. It just so happened we had a big wall of hedges between our forces and really not much else in the way of cover. I started first this time, so I ran my archers to the hedge and followed behind with my soldiers. Chris took up a position on the other side of a gap, making the area between our two forces a pretty terrifying killing field for either side. Chris ended up running his unarmored soldier across a gap where my side did not have a solid view and then around a building. I had to move several of my soldiers over to that side while also trading arrows back and forth across the no man’s land. His soldier was quickly overwhelmed but it broke the strong front I had presented and after a lucky arrow, my defence of the gap between our forces fell apart and he moved everyone forward. I’m not going to lie… even though this was only using a variation of the quick start rules this whole encounter was probably the most fun I had in a game of Anthems of War yet. Eventually this third battle ended in a 2×2 fight, he charged one of his soldiers into my remaining archer and I charged my remaining soldier into HIS remaining archer. I was able to take out his archer and then move my soldier to help his buddy. That archer must have been pumping iron though, because he needed no help and ended up killing the soldier in melee combat.

That was it for my games with Chris that day. I ended up heading over to John’s place. John, Matt, and I were told we had to have a boys night because my fiancee and our significant others were out for her bachelorette party. This time I brought much less with me. I only took my tackle box. This box has a ton of minis and some terrain in the bottom. There is enough stuff in there to do a bunch of different battles so I thought it would be great for a quick game or two. 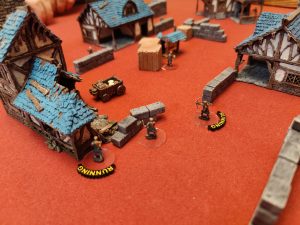 We ended up only playing one game. Up until this game I had always been one of the players to play in my playtests. This was a unique scenario for me where I could get two players who DIDN’T write the game to play. It meant I could watch them and see if there were any big hiccups in the gameplay that I wouldn’t have noticed otherwise. Most importantly, when you step back and observe someone playing a game you get a much better sense if they are having fun or not. Matt chose the cat folk he always plays with and John chose some humans. The game was a quick one. I set up the terrain, got Matt and John to roll off, they chose their deployment zones and played. The game lasted about 5 rounds with lots of back and forth combat. Unfortunately, John forgot to check behind a building where Matt had a single soldier tucked away. By the time John moved up to take advantage of an area he left his back completely exposed and Matt’s soldier took out two of John’s. It ended up being a complete wipe as John quickly found his troops completely surrounded.

So, I played 4 quick start games involving 4 different players. To date I have played about 15 quick start games and 6 full games. I have also done… I don’t know… hundreds of mini paper scenarios, and scenarios where I pushed minis around a table by myself to test out game mechanics. I expect this number to increase as lockdowns lift and as I get the game into more people’s hands. I am still just slowly rolling out my playtests. There is still a lot of work to go into the art side of the book so the major playtesting still has plenty of time to continue!

That’s all! Playtesting went extremely well, I am still in love with this little game and everyone I play with seems to enjoy it just as much! I can’t friggin’ wait to get this in everyone’s hands.

Until next time folks! Links to all the socials in the footer! Go drop a comment on this post on my Instagram or Facebook page about what you want to see me write about next. I was thinking of turning some of these early games and playtests into short stories, not only to flex my creative muscle but to give a bit of variety to these blog posts. What do you all think? I won’t do that with all of them but a story out of a few could be fun!

Anthems of War is Live!

The Dawn of a New Age